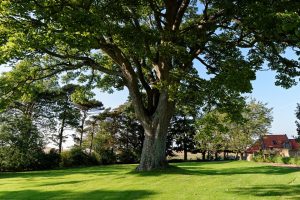 As we destroy nature, we destroy ourselves. It’s a selfish thing to want to protect nature

Humans are not separate from nature, but part of it. As a society, we urgently need to relearn this concept, for the sake of our health.

It’s well established that our survival depends on intact ecosystems and biodiversity (the variety of life on earth). They provide us with essential life-support services such as food, clean air and water, healthy soil, medicines and disease regulation.

However, we don’t just need nature to survive, we also need it to thrive: there is now a growing evidence base to support what we intuitively already know; that our physical and mental health and wellbeing are dependent on interacting with a healthy natural environment.

Despite this, our society tends to treat the natural world solely as a resource to be exploited for our benefit. This shortsighted, extractive philosophy has resulted in the numerous environmental crises we face today: climate breakdown, ecosystems collapse, air and water pollution, biodiversity loss, deforestation, industrial fishing, intensive agriculture and plastic waste. These are all detrimental to human health and some threaten our very survival.

Air pollution for example, is a massive global public health issue. Pollutants from vehicle emissions, industry and fossil fuel combustion are responsible for millions of deaths worldwide from cardiovascular disease, asthma and lung cancer. It is also thought to be a risk factor for neurodevelopmental problems in children and neurodegenerative diseases in adults.

Climate change is said to be the biggest global health threat of the 21st Century, causing food and water insecurity, morbidity and mortality from heat waves, droughts and floods, and mental health problems arising from such extreme events.

Biodiversity loss is a less well-publicised, yet incredibly important health problem. Biodiversity refers to the huge variety of life on earth; not simply species, but also genes and ecosystems.

It’s estimated that there are about 15 million species on Earth; so far we’ve identified approximately 1.9 million. The background or natural extinction rate of species is approximately 1 per million per year, however the current extinction rate is thought to be 100-1000x greater than this due to human activity.

This level of global biodiversity loss is massive and unprecedented. We are in the throes of the earth’s 6th mass extinction event, however for the first time it is caused by human activity: mostly by habitat destruction on land and in the oceans through deforestation, bottom trawling, damning and dredging of rivers and drainage of wetlands. There are other human caused drivers such as pollution, the introduction of invasive species and climate change, which is likely to exceed habitat loss as the most significant threat in the not too distant future.

Why should all this matter to us, aside from the fact that we have a moral obligation to act as stewards of the natural world?

Biodiversity underpins ecosystem function and is therefore essential for providing all the life-support services mentioned above. It also represents a huge, mostly untapped source of potentially life-saving drugs and medical research. Over half of all drugs developed over the past 25 years are either derived directly from, or modeled after natural compounds: morphine, aspirin, warfarin, antibiotics, chemotherapy drugs, ACE inhibitors and AZT, to name but a few.

Despite the many medical breakthroughs we’ve derived from nature, we’ve barely begun to scratch the surface of what it has to offer mankind, yet we continue to allow our greatest repositories of biodiversity to be degraded or even lost forever. Rainforests are being cleared at alarming rates for agriculture, cattle ranching and timber; 17% of the forest in the Amazon has been lost over the past 50 years. Coral reefs are being destroyed by ocean warming and acidification, as a result of climate change. Who knows how many potentially life-saving discoveries have been wiped permanently from existence?

When we start to view environmental problems in this way (i.e. as a public health emergency), it becomes clear that those of us in the healthcare industry have a responsibility to start addressing environmental degradation.

As healthcare practitioners, we are ideally placed to educate our patients, students and the public about the inextricable links between the environment and human health; to promote sustainable, low carbon behaviour; and to convince policy makers that robust environmental legislation is urgently required, as is health promoting infrastructure, such as active travel networks and access to urban green spaces.

If we’re going to start engaging in environmental advocacy, then we’ll have to adopt an evidence-based approach where possible, as we do for the rest of our practice. However, in the face of life threatening problems, it is inappropriate to postpone preventive measures while we wait for full scientific certainty. This is known as the precautionary principle, and it is a key component of environmental decision-making.

Having said that, much evidence now exists to support the assertion that our physical and mental health depend on our interaction with nature. A variety of studies suggest that contact with nature reduces mortality from all causes, alleviates stress, improves mood and self esteem, increases levels of physical activity, increases concentration, reduces symptoms in mental health patients and children with ADHD, and reduces indicators of physiological stress such as pulse rate, blood pressure and cortisol levels.

Urban greenspace (i.e. any vegetated land such as parks, gardens, woods and wetland within an urban area) has also been shown to increase social interaction, reduce health inequality, reduce crime rates, and improve air and noise quality. Interestingly, it’s thought that as the species richness of an area increases, so do the psychological and physical benefits.

At this stage, although extensive, the evidence is of varying degrees of quality. Some of it is short term, with surrogate end points, sampling bias and self reporting. Most of it is correlational. It also tends to be biased towards higher latitudes (ie. North America and Europe) and Western Societies. Clearly there is more work to be done, however, the overwhelming majority of these studies show a positive association between interaction with natural environments and human health measures.

Of course, if health professionals are going to take a leadership role in advocating environmental protection and promoting sustainable, healthy, low-carbon behaviour, then we also need to get our own house in order. The NHS is a major emitter of CO2, and is responsible for approximately 25% of total public sector emissions. It also generates huge amounts of waste, the vast majority of which ends up in landfill.

The healthcare industry has the opportunity to set an example to the rest of the population:

We could build energy efficient hospitals powered by renewable sources, incorporating green space for patients, staff and the local community to use for exercise, rest and relaxation. We must significantly reduce our waste through more appropriate procurement, waste segregation and recycling. Hospital should be sourcing healthy, seasonal, local food; promoting active travel and public transport for staff and patients; and providing incentives for staff to reduce their ecological footprint.

I’ll leave you with a final quote to ponder:

The future will be green, or not at all