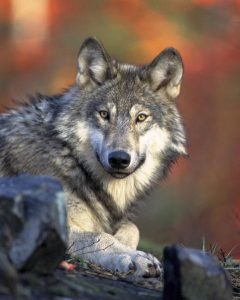 Rewilding can be a pretty divisive issue, particularly when it involves top predators such as wolves and lynx. As you might expect environmentalists are generally enthusiastic, whereas many rural landowners oppose this alternative approach to land use. The general public appear to be fairly ambivalent, and understandably it’s not at the top of many people’s priority list.

However, it’s a fascinating subject and it’s importance is arguably under appreciated.

Rewilding is already occurring in many parts of the world. In mainland Europe, in recent years, there’s been the spontaneous and supported return of many previously threatened species such as bears, wolves, beavers, lynx, ibex and eagles. In North America, wolves were reintroduced to Yellowstone National Park in 1995, after a 70-year absence.

However, these changes have not been met with universal approval, and in certain areas have resulted in conflict and controversy.

So, can the age-old antipathy between wolves and humans be overcome in the UK? Could we see wolves roaming the Scottish Highlands in the not too distant future?

The idea behind rewilding is that reintroducing large predators back into ecosystems that they once inhabited, allows those ecosystems to regenerate.

This finding is based on the concept of trophic cascades. A classic example of which is the changes that were observed in the landscape when wolves were returned to Yellowstone:

As predicted, the wolves started to prey on the elk, which reduced their numbers and hence their grazing pressure. Understandably, elk also started to avoid areas where they were likely to be eaten, such as next to streams. This led to increased growth of riverside species such as aspen and willow, which in turn led to reduced riverbank erosion and allowed bird and beaver populations to increase, which led to a rise in fish and otter numbers, and so on through the ecosystem.

Given these impressive regenerative effects and the fact that our neighbours are all at it, why not do the same in the UK? Indeed, why doesn’t rewilding already form a part of mainstream conservation policy?

The UK is in many ways an ideal candidate for rewilding. Its upland areas have undergone centuries of degradation, thanks to clearing of native forest and overgrazing by sheep (in England and Wales) and deer (in Scotland). This has resulted in a fairly barren landscape of heather moorland, lacking in biodiversity and depleted of ecosystem services.

Rewilding would have different aims and strategies in various parts of the UK, but in Scotland it means the return of native Caledonian Forest, ideally replete with wild boar, lynx, beaver and of course, wolves.

In terms of feasibility, Scotland is the only area of the UK that could support a wolf population. One study calculated that, given the minimum viable population number to maintain genetic variability for wolves needs to be around 200, and based on a typical wolf population density of 2 per 100km2, then an area of at least 10,000km2 of suitable habitat would be required.

This exists in the Scottish Highlands, but unlike Yellowstone, much of this land is in the hands of private estate owners who run deer and grouse shooting businesses, and thus may not take too kindly to this new addition to their property.

Having said that, deer numbers are so great in the Highlands that culling is required in order to meet Deer Commission targets; so by preying on deer, wolves may even be of economic benefit to these estates.

In terms of human population and road densities in the Highlands, both are comparable or lower than those in European and North American areas where wolves exist.

Other reasons to reintroduce wolves…

In addition to the ecosystem benefits, there are several other justifications that could be used to help win over a sceptical Scottish public:

Moral obligation: do we have a moral duty to restore extirpated species to their natural habitats? This is a philosophical argument, and many would counter that wolves don’t actually care that they’ve been removed from the UK.

Human Health: there is now a great deal of evidence that links environmental degradation with adverse effects on human health. Restoration of ecosystem services through rewilding would provide clean air, clean water, healthy soil, reduce the risk of flooding and help mitigate climate change, all of which are vital for our health and wellbeing.

Despite these benefits, opinions about wolves are mixed. In North America, the majority of the general public do support wolf reintroduction, with approximately 60% in favour. In Europe however, this is not the case, with a paltry 36% of the UK being supportive. In rural communities, support is even lower.

Resistance is most likely to be due to three things:

Farmers and other landowners have been the most vocal group in their criticism of rewilding in Europe and North America.

In the Pyrenees, thanks to depopulation of rural areas, coupled with government conservation projects, previously threatened species now thrive, such as bears, wolves, beaver, marmots, feral goats and deer.

Unfortunately, but somewhat inevitably, these wild animals have entered farms, grazed, preyed on livestock and spread disease. These effects, coupled with the fact that many of these animals are now protected species, have resulted in the perception that conservation and ecotourism are valued above the welfare of local communities.

In Sweden and Norway, the wolf population died out in the 1960’s through hunting, but the area was then naturally recolonised from Finland in the 1980’s, and now a Scandinavian population of around 380 exists.

Despite being a protected species according to the Bern Convention on the Conservation of European Wildlife and Habitats, it is estimated that 50% of wolf mortality here is due to poaching. The source of conflict is moose hunting, a popular activity in Sweden. Wolves prey on moose and reduce their numbers, but also kill the hunting dogs, which makes them deeply unpopular amongst many Swedes.

Farmers would probably be the biggest losers if wolves were re-established in Scotland, as there would undoubtedly be attacks on livestock, as has occurred in Europe. However, in countries where wolves have been reintroduced, it has been estimated that they are only responsible for around 1% of livestock deaths, and compensation schemes have been set up which remunerate farmers whose livestock are killed in this way.

The negative folklore and mythology that surrounds wolves should not be underestimated as a barrier to their reintroduction. We do not have to look far for evidence of the wolf’s image problem. Consider the sayings “a wolf in sheep’s clothing,” or “keeping the wolf from the door,” and fairytales such as Little Red Riding Hood and The Three Little Pigs. We are conditioned from childhood to believing that wolves are our mortal enemy.

However, this reputation is not backed up by evidence. Wolves have been known to kill humans, but these events are so rare that the risks are difficult to quantify. Attempts at quantification usually invoke comparisons with the chances of being struck by lightning or killed by a vending machine.

One of the many interesting things about rewilding is that it makes you look at familiar landscapes through a new lens. The Scottish Highlands are portrayed by conservation groups, guidebooks and the media as one of the last remaining areas of wilderness in Europe. However, the reality is they are anything but wild, having been intensively managed by humans for centuries. How have we allowed this misconception to be perpetuated?

According to George Monbiot, it’s because of ‘Shifting Baseline Syndrome.’ Each generation perceives the state of ecosystems they experienced in their youth as normal, and thus the benchmark to be maintained, when in fact, they were already in a state of severe degradation.

In the UK, this has resulted in conservation groups going to great lengths to maintain a landscape that, in terms of biodiversity, is fairly barren and monotonous, when compared with its former glory that rewilding seeks to restore.

So what is the solution in the UK?

Many of our neighbours in Europe and North America are living with wolves, bears and lynx, and are actively pursuing further rewilding goals.

Australians are certainly no stranger to co-existing with potentially dangerous species such as snakes and spiders, crocodiles, sharks and jellyfish. Why are we reluctant to follow suit in the UK, given the potential benefits described above?

I think we have become used to living in our safe, green and pleasant land, with rolling hills, intensive agriculture, sheep, deer and not much else. But it was not always this way and does not have to remain so. We could re-introduce wolves fairly quickly if the will was there, but this would require a number of things to happen first:

There needs to be government support for wolf reintroduction, and for rewilding to become official environmental policy.

There must also be genuine support from the general public. To achieve this, wolves will need an image makeover, through effective campaigns that present an exciting new vision of a rewilded Britain.

Crucially, there needs to be cooperation from farmers and estate owners in the Scottish Highlands. There is some evidence that estate owners are less opposed to rewilding than farmers, as they may even benefit financially through eco-tourism and negation of the need for costly deer culls.

Convincing farmers and the National Farmers Union may prove to be the most challenging aspect, and this would certainly include providing financial compensation for any livestock that were killed by wolves.

However, providing incentives is equally important, and it’s been suggested that instead of receiving subsidies for grazing sheep, farmers could be paid for rewilding services such as planting native trees.

Personally, I would be happy to see wolves reintroduced to my native country, not only for the reasons given above, but also simply because it would be thrilling to have them here. I regularly explore the Highlands to walk and climb, and the idea of wolves being out there only makes the landscape seem more appealing.

From a purely rational viewpoint, if done properly, rewilding with wolves could have widespread benefits: ecosystems regenerate, biodiversity thrives, local communities prosper from eco-tourism, farmers are rewarded, our guilt is assuaged, flood risk is decreased and carbon dioxide is sequestered!

However, I totally appreciate that not everyone shares these sentiments!

What do you think? Could you live with the big, bad wolf?